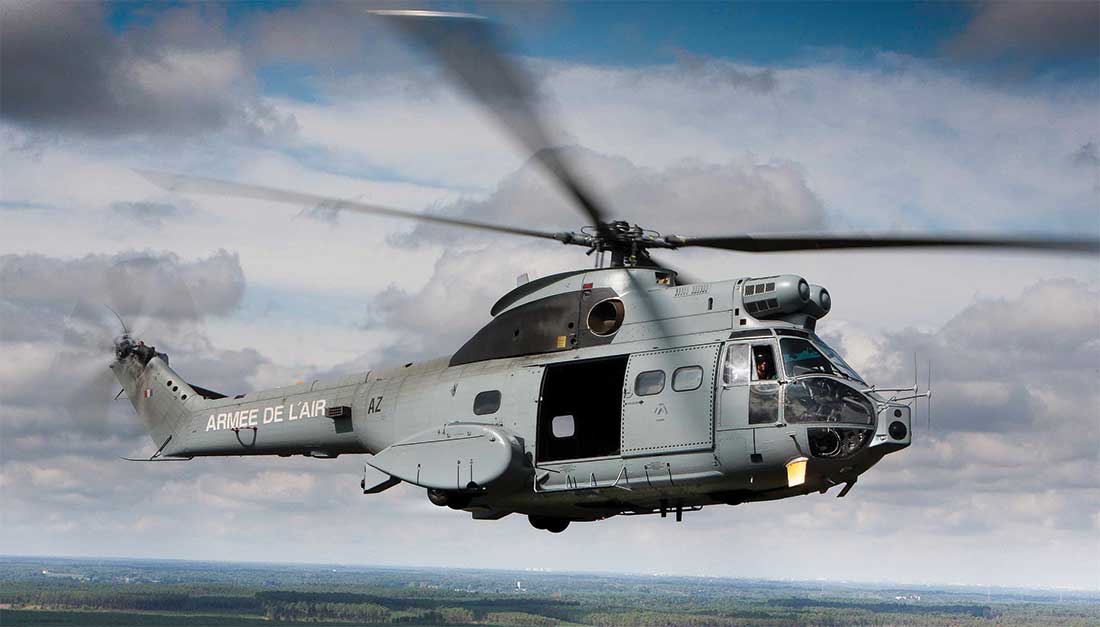 On March 31, 2017, on a sunny day at Air Base 120 in Cazaux, in southwest France, the EH 1/67 Pyrenées helicopter squadron finally officially bid adieu to its favorite aircraft—the SA-330 Puma—after more than 40 years of loyal service. In addition to the symbolic nature of the withdrawal of the legendary helicopter that had been serving the squadron since it was founded in 1975, the diverse and talented staff will have to adapt to running their missions on an aircraft with considerably broader abilities.

THE TRANSITION HAS BEEN WELL ORGANIZED AND SHOULD GO OFF WITHOUT A HITCH, DESPITE THE FORESEEABLE DIFFICULTIES ARISING FROM A LACK OF AIRCRAFT.

THE SMOOTH CHANGEOVER IS PARTICULARLY IMPORTANT FOR EH 1/67 PYRENEES, WHICH RUNS WIDELY COVERED SEARCH AND RESCUE (SAR) MISSIONS ON

LAND OR AT SEA, AS WELL AS MORE SECRET MISSIONS, LIKE THE RESCUE OF TEAMS DOWNED BEHIND ENEMY LINES (RESCO) OR INFILTRATION AND EXFILTRATION

OF SPECIAL FORCES COMMANDOS. DESPITE ITS REPLACEMENT BY THE EC 725 CARACAL, THE PUMA WILL HAVE LEFT ITS UNIQUE MARK ON THIS ILLUSTRIOUS

UNIT OF THE FRENCH AIR FORCE.

A long and glorious career

Unlike French Army Light Aviation (ALAT) aircraft, which are primarily used to transport troops and cargo, the SAR and RESCO versions of the Puma, which have now taken their leave of the EH 1/67, were specially equipped, beginning in 1986, to better fulfill their search and rescue missions to save civilians, and their RESCO missions to bring home soldiers downed behind enemy lines. Equipped with a hover flight coupler needed for hoisting at sea with no visible horizon, the SAR Puma also features special equipment for locating civilian distress beacons as part of its search and rescue missions conducted day or night, thanks in particular to an impressive spotlight. As for the RESCO version, it features integrated weapons, a 7.62 mm machine gun or 20 mm canon, wider sponsons for greater autonomy, missile detectors with decoy flare launchers, and bullet-proof panels to minimize risk if attacked during a mission behind enemy lines. To that end, the aircraft also has specific military communications and locating equipment. As all of the squadron personnel—both pilots and mechanics—familiar with the aircraft explained, “The Puma was a simple, sturdy and powerful helicopter, perfectly suited to the missions it was developed for, and able to evolve to face new challenges.”

The pilots praised the way they could push the Puma to the limit, without the electronic constraints that make more modern aircraft more fragile as well. They also touted the advantages of greater autonomy during missions in hostile territory or in areas with extreme climates. Much like a Mirage F1 or Jaguar compared to a Rafale, the Puma is often described as “a pilot’s helicopter”: an aircraft that handles operational constraints and isn’t easy to break. In addition to discreet missions conducted in many of the world’s most dangerous regions, during its 43 years with the EH 1/67, the Puma also participated in most of the major conflicts featured in the media, including Operation Daguet in 1990, as well as the Balkans and Operation Turquoise in Rwanda in 1994. In 1999, the squadron and its feline aircraft were involved in Operation Trident in Macedonia, followed in 2003 by several missions in Africa during Operation Artemis in Uganda and the Democratic Republic of the Congo, then in Côte d’Ivoire in 2006. In 2010, the squadron helped save 136 people during Cyclone Xynthia, before flying off to join Operation Harmattan in 2011 and then on to Mali in July 2013 for Operation Serval, with two RESCO Pumas. The aircraft continued faithfully flying the squadron’s SAR missions right up to the end.

Given the Puma’s remarkable service, the changeover to the Caracal was carefully decided years ago, allowing time for a smooth transition. Nevertheless, moving from one fleet to another will still be a complicated process for several reasons. First and foremost, the number of EC 725s available is insufficient to comfortably take over for the Puma. Even if the planned transfer of 10 Caracals currently operated by the French Army’s 4th Special Forces Helicopter Regiment (RHFS) to the EH 1/67 to make up for the small number of aircraft initially ordered goes as planned, there will still be a significant problem: maintenance. Because, in addition to the lack of rotorcraft, the squadron will have to manage mandatory visits to the manufacturer for major maintenance and updates for compliance with the latest norms. And there are always malfunctions too complicated to be handled locally and the occasional incident. All of these factors have the EC 725s on the ground for an undetermined duration. In the meantime, the EH 1/67 managers are faced with the daily challenge of spearheading SAR operations, training young pilots and ensuring continued skills development for more experienced squad members, all while handling RESCO and Special Operations missions. With an eye to easing their load, they have signed a renewable two-year lease on an H225 (the civil version of the Caracal) with Icar Aéronautique. This helicopter, maintained and brought online in Cazaux by this third-party service provider as agreed in the contract, which guarantees a set number of flight hours, like the EC-120 Colibris in Dax, will relieve some of the pressure put on the Caracals the EH 1/67 is currently able to fly. And the material difficulties linked to the Puma’s replacement by the Caracal are not alone—the human resources repercussions have also been problematic. The squadron has had to train several pilots to bring them over from the Puma to the Caracal, which is much more than a formality given how “specialized” the latter is when compared with its predecessor. The new functions found on the Caracal have created a need to train and certify pilots on a wider range of missions. The lack of aircraft has led to the base having pools of pilots specialized in the squadron’s three main mission types (SAR RESCO and Special Forces), which need to be homogenized. The EH 1/67 has also had to train maintenance personal in advance of the switch. Some of the staff have moved from one helicopter to the other, alternating training periods with work days at the squadron, complicating scheduling.

Despite all of the advance planning, the Puma-to-Caracal transition has not been painless, and it’s far from over. Despite these difficult circumstances, the EH 1/67 has managed—thanks to its personnel—to fulfill its operational role on a daily basis as it moves slowly but surely towards its future with the Caracal, which, according to the pilots, “is a formidable helicopter, one that is particularly efficient in all flight circumstances.” In fact, despite its undeniable qualities as a tireless soldier, the insights shared by the team tended to characterize the Puma as an aircraft that had reached the maximum of what it could achieve and which, according to its users, “was no longer suitable for the difficult and intense situations found in current theaters of operations.” At first glance, it’s clear that the cockpit, with its host of analog instruments, is that of an old-generation helicopter that it would be difficult and expensive to update, particularly in competition with a helicopter designed specifically for the squadron’s missions, like the Caracal. Among the Puma’s most-cited flaws are its limited weight capacity in hot weather and high altitude, and the lack of autonomy since it is not equipped for in-flight refueling—a particularly important ability for secret missions deep in enemy territory. Its navigational, self-defense, communications and identification technologies are also all outdated, particularly for projects that entail working with other NATO forces. And despite “easy” maintenance, the aircraft is starting to show its age, with availability rates that continue to fall. For all of these reasons, the Puma moved over for the Caracal to take its place with the EH 1/67 Pyrénées on May 1. But that doesn’t mean the French Air Force is done with the Puma—the former Cazaux residents will now be stationed in French Guiana, with the Overseas Helicopter Squadron (EHOM) 00.0068 Guyane, and in Corsica, with the EH 1/44 Solenzara. This new life for the Pyrenean felines is the result of organizational changes made to the French Air Force’s helicopter fleet in 2016. The squadron based in Corsica will receive 12 Pumas, becoming the last squadron in mainland France to operate this iconic rotorcraft. 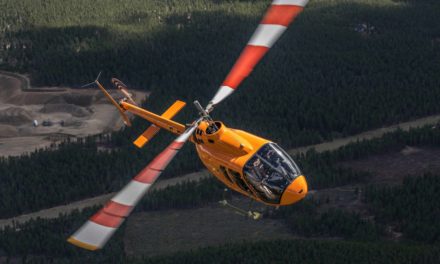 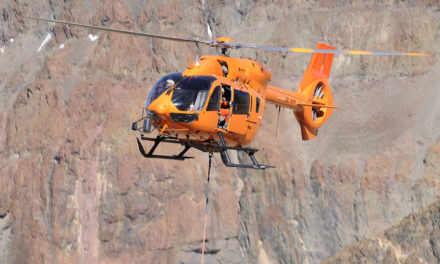 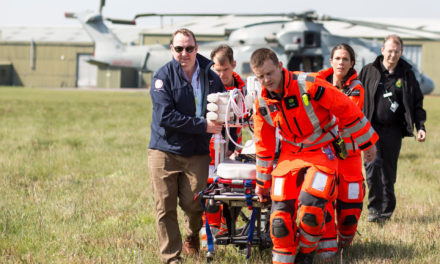