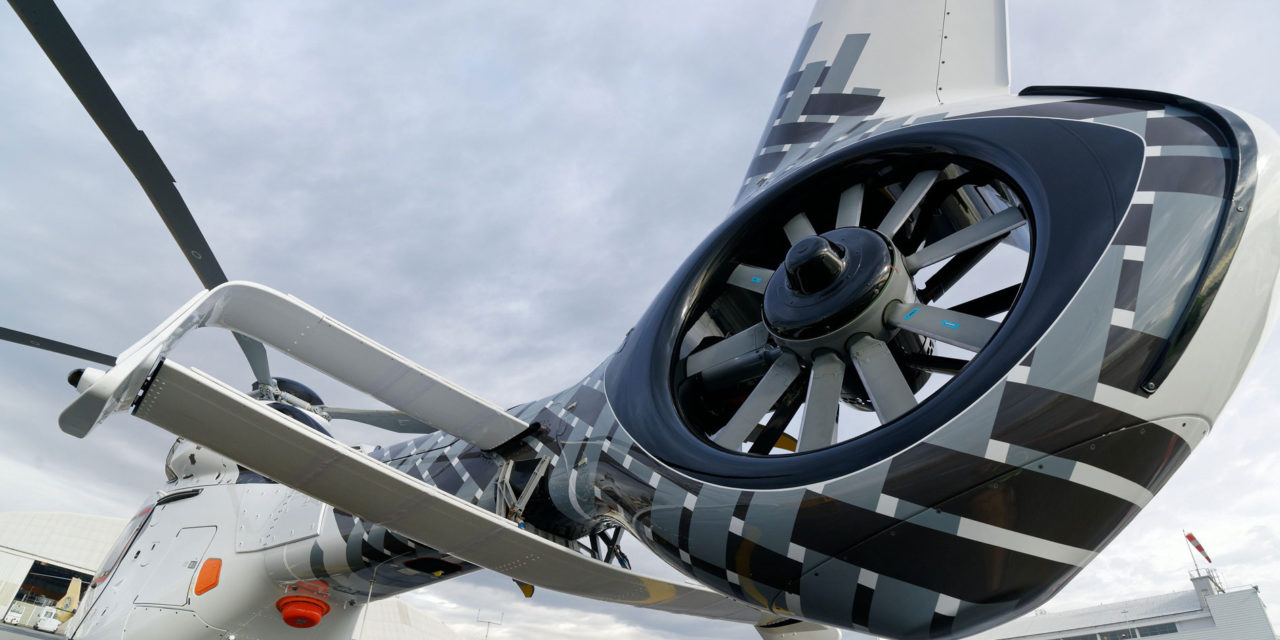 April 12th, 1968, an important date at Marignane with the first flight of the Gazelle equipped with a “fenestron”. A look back on a major innovation in the helicopter world.

Gazelle, Dauphin, EC120, H130, H160, made in Marignane, but also H135 and H145 made in Germany: the fenestron has become in 50 years the trademark of the machines of Sud Aviation, at first, then followed by Aérospatiale, Eurocopter and Airbus Helicopters. However, some notable exceptions: the Squirrel (Ecureuil, alias H125), best-seller of the range, are not equipped with it. Nor so the heaviest machines of the top helicopter manufacturers worldwide. Before seeing why, let’s take a small step backward to Marignane at the end of 1960s.

At the origin of the fenestron, two engineers of great talent, Paul Fabre and René Mouille, and one requirement: reduce the number of accidents during flight or on the ground due to the anti-torque tail rotor (RAC) which were often fragile at the time and unfortunately placed at the level of e pedestrian. “René Mouille talked of how he had seen with the own eyes somebody be ripped apart by a classic unprotected anti-torque rotor on a small machine” Alain Vuillet, who entered the aerodynamic department of the engineering consulting firm Aérospatiale in 1976 remembers. “The search for a safer technical solution became an obsession for him…” The installation of the RAC in a fairing also housing the tail fin, was a solution fairly simple to describe and its installation on the second prototype of the Gazelle (SA 340-002) was made very quickly. But if the advantages regarding safety were quickly understood, the development itself was more delicate. The first installation resulted in a crash-test and it was necessary to have many more attempts on the bench, in blower and during flight to create finally an operational piece of equipment. “Important work was made on the profile of blades and on the shape of the hull to obtain thrust and an acceptable level of efficiency, as well as on the horizontal and vertical stabilizers to obtain good quality flight control” adds Alain Vuillet. “The fenestron gave the Gazelle a very modern line, it brought more security, fewer high-speed constraints, less vibration in all aspects of flight. All that with acceptable inconveniences in term of weight, power assessment, complexity and price. But there were obvious perspectives for improvement on the fenestron, while at the time we did not see it clearly on the classic RAC.” The first devices equipped by fenestron were also criticized for the inherent noise. A phenomenon which would be controlled by playing with the space and the presence of blades as well as the rotation speed.

This first generation of Fenestron was endowed with metallic blades distributed simply around the hub and it equipped straightaway the Dauphin – the replacement of the Alouette III – of which the first prototype flew in June 1972.

In 1975, the engineers tried to adapt the fenestron to a 7 ton Puma. The installation, including eleven blades, measured 1m60 in diameter. It had been the subject of a large amount of research, but the results were not conclusive. The experiment was without a future but the research was not useless: besides very significant improvements in optimization, it showed, and without ambiguity, that beyond a certain size, the fenestron was too big, too heavy, and too complex to be a viable solution.

The second generation of Fenestron came into being at the end of the 70s. It was connected to the evolution of technology in materials and to the call for bids by the American coastguard for a device endowed with the high maneuverability necessary for  rescue operations at sea and in hot weather. The Dauphin was then proposed with a new fenestron with a diameter of 1m10 (it was at the time about the biggest ever made), 20% bigger than that of a classic Dauphin, but without an increase in mass thanks to the wide use of composite materials in manufacturing the blades, the hull, the tail fin and the wide part of the hub.

Too expensive for the Ecureuil (Squirrel)

The fenestron will be finally adapted to a wide selection of machines at Marignane, but paradoxically not to its best-seller, the Ecureuil (Squirrel). “There was a real in-house debate” remembers Alain Vuillet. “The director of the factory, Fernand Carayon, wanted to create a very modern, revolutionary device from the point of view of manufacturing costs and operation. He could then rely on a wide use of composite materials and on a large choice of new generation, relatively economic turbines. But, in this spirit, he also preferred the use of the simplest and cheapest back rotors. At the same time, other arguments seemed to favor the fenestron. We know which one finally won the debate…”

Nevertheless, the fenestron continued to be the subject of intense aerodynamic research to understand better its functioning and improve its efficiency. A constant work on the profiles of the blades, the forms of the hulls and with the addition of the stator assembly made up of fixed vanes allowed it to obtain an aerodynamic efficiency identical to that of the classic back rotor with double the diameter. The research led between 1987 and 1991 were validated on a modified Ecureuil (Squirrel), the AS350 Z and favored the emergence of the third generation with the sound emission greatly reduced. The modulation of the distribution of the blades to avoid concentrating the sound emitted on a dominant frequency, the adoption of the stator with thin and oblique blades and the decrease of rotor speeds allowed the silent fenestron to be born.

A few years later, Aérospatiale and MBB began a merger which gave birth to Eurocopter. This merger was cemented by the program of the armed helicopter Tiger and the question of the RAC arose one more time: would it be classic or would it be a fenestron? The first solution won, “because it was still too early in the French-German cooperation to impose the fenestron, the technical solution was ‘typified’ much too French in the eyes of the Germans” summarized Alain Vuillet. In 1994, the integration having moved forward, the EC135 was the first device to receive the third generation fenestron, immediately followed by the EC120. In 1999, the EC130 arrived endowed with a fenestron closely derived from that of the EC135. In 2011, on the occasion of its motor renewal, it was the finally the turn of the EC145 to receive the equipment so much desired.

Finally in 2015 a new stage is crossed with the demonstrator Bluecopter, thanks to the optimized blades and stator design. The acoustic cover incorporated into the fairing of Fenestron and the active steering of the tail fin also contributed to reducing the noise of the machine. So many of the innovations that we find today on the H160 including the peculiar silhouette, are due to the inclination of the fenestron.

A specialty from Marignane

Finally, we notice that the fenestron is limited today to the range of single-engine aircraft and light twin-engine planes. The H160, which is presently attempting to pass certification, is at the moment the heaviest device (approximately 5,4 tons) which is equipped with it. The fenestron remains a specialty of Airbus Helicopters, even if some other devices were equipped with it around the world, thanks to partnerships or to patents falling into the public domain. We cite, for example, the RAH 66 Comanche by the duo Boeing-Sikorsky (still in the prototype state), Kamov 60/62 Russian still in development or the Kawasaki OH-1 and Japanese Mitsubishi MH2000, the SH09 by Kopter, without forgetting naturally the Cabri by Bruno Guimbal. According to what the engineers glimpsed at the end of 1960s, the concept of the fenestron lent itself well to major technical evolutions …