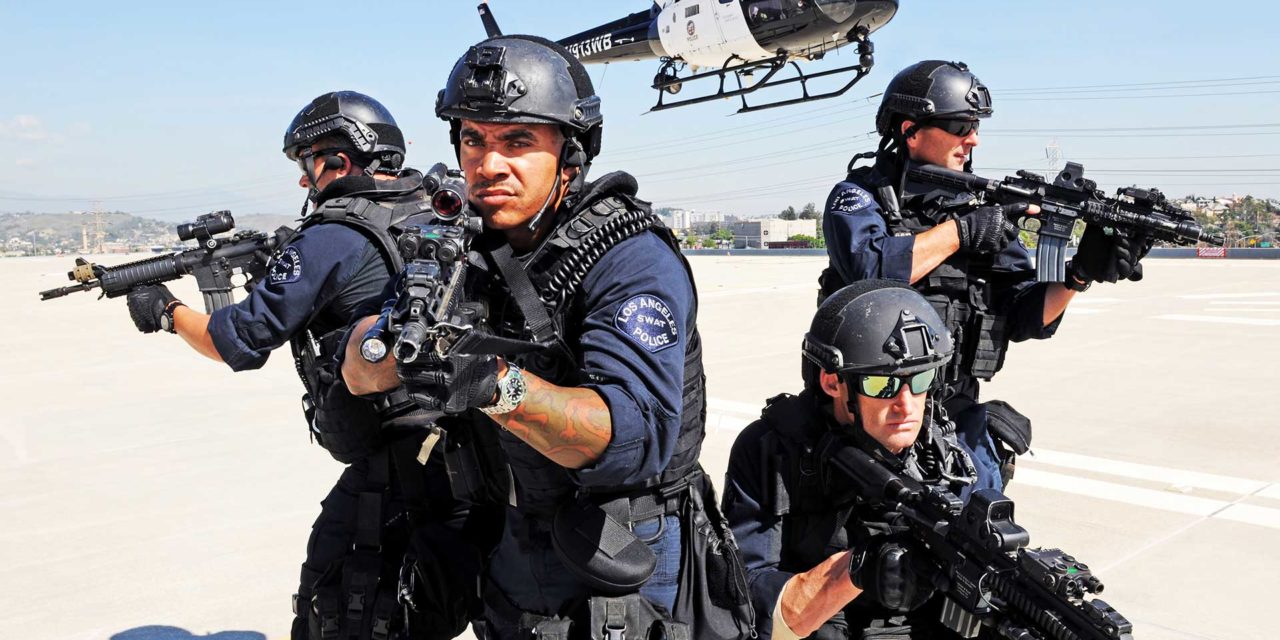 The “city of angels” and its county are one of the world’s busiest airspaces, with over 10,000 daily aircraft movements. In this traffic fly various emergency and law enforcement agencies, the LAPD, LAFD, LASD and LACoFD air services in which European makers got the lion’s share. Let’s visit the second US city’s aerial first responders.

Fitting into the traffic

No less than twenty-five airports of various sizes and classes are disseminated within the “greater-Los Angeles” area, ranging from the busiest at Los Angeles International Airport, LAX in short, with over 1,600 movements every day, to hardly twenty at the smallest at Flabob. Nevertheless, any aircraft, no matter its type or size, is welcome in this busy airspace and everything works just fine under the strict and efficient guidance of the Palmdale ATC controllers. And the thick LAX airspace is crossed by no less than five VFR routes, one of them crossing both runways at 2,500 feet directly above the numbers.

This is the playground where the Los Angeles city and county emergency helicopters fly with no issue whatsoever, as Deputy-sheriff Keith Edey told us: “There is no priority for emergency helicopters but those that are considered to be medevac flights are generally given priority by air traffic control. The public service helicopters operating in Los Angeles have an excellent relationship with ATC.” There are many airports in the county but only thirteen of them have a manned control tower and only the larger airports’ towers remain open at night. “An example of an excellent working relationship is that between LAX and the law enforcement helicopters that service the communities within LAX’s airspace. LAPD and LASD cover the entire LAX surface area. There is a specific frequency that the helicopters use to communicate with the busy tower. Pursuant to a Letter of Agreement, the law enforcement helicopters operate in segments of airspace around the airport that are referred to by numbers. All helicopters in the Los Angeles area are also encouraged to monitor a common traffic advisory frequency while operating in the area.  This is intended to allow direct communication between airborne helicopters for the purpose of collision avoidance.”

Historically, air operations started in the 1950s with Bell 47s. The value of helicopters in motorway surveillance and fire coordination led to rapid developments of the flying units, with more machines and the introduction of the ubiquitous Bell 206s during the 1970s. The corollary was obviously the increase in the number of missions assigned to air assets and their increasing role in local authorities’ aerial operations.

Regarding the operating zone, the county of Los Angeles covers 4,751 square miles with a population exceeding ten million, while the city spreads over 502.76 square miles with four million residents, and the law enforcement forces are up to the task. Sheriff Alex Villanueva, for example, leads an 18,000-employee force, making it the largest sheriff’s department in the US. Weather permitting, LAPD’s Air Support Division (ASD) has two AS 350 B2s or H125s in flight at any given time for patrol and ground forces support. Called ASTRO and representing about 80% of the flights, these force multiplying missions can monitor larger areas with more efficiency than police cruisers. The sheriff’s Aero Bureau also has flying patrols running from 5:00AM till 6:00AM the next day, with crews on duty for 10-hour shifts.

Made famous by the 1983 motion picture Blue Thunder, the ASD has been established in 1956 with a single Hiller UH-12J primarily used for freeway patrol. As the concept met expectations to a high degree, more helicopters joined the program by the years. The unit experienced major developments during the 1970s, with the delivery of turbine-powered Bell 206Bs that allowed the ASD to respond faster and deal with other types of missions. The first A-Stars were delivered in 1988 and the fleet continued to expand, nowadays consisting of eleven AS 350 B2s and four H125s. The later model received in 2017 is due to replace all B2s and the fleet is now receiving a black and white scheme similar to other LAPD vehicles.

The frameworks are relatively similar between the city police and the sheriff’s, the crews generally consisting in a pilot and an observer/systems operator, both sworn agents with several years of field experience. “The missions of the Aero Bureau include patrol, surveillance, search and rescue, reconnaissance and photography, and transportation flights,” says Deputy Edey, instructor-pilot on A-Star and Super Puma, “the vast majority of flight time logged by Aero Bureau pilots is in support of the basic patrol mission. Patrol helicopters are available and operational 24 hours each day. During a typical patrol shift, a crew will be on duty for 10 hours. Of these 10 hours, the crew will fly six proactive patrol hours, assisting the twenty-three patrol stations on priority activities. Surveillance is a mission primarily supporting detectives when they need to follow criminal suspects without being detected.” The Aero Bureau pioneered helicopter support when it introduced a patrol and SAR Bell 47 back in 1955, followed by another two in 1957.

The main missions back then were flown in support of bushfires, then the Watts riots in 1965 pushed air support for law enforcement under the spotlights: “Search and rescue was the original mission for the helicopters assigned to the Aero Bureau in the 1950s”, explains Deputy Edey, “the mission has evolved over the years to be a joint operation between two separate units within the Sheriff’s Department. Rescue operations within the County of Los Angeles can occur anywhere from sea level, on one of the offshore Islands, to over 10,000 feet on the inland mountains. The most common rescue mission is in response to motorcycle crashes on the mountain roads. Reconnaissance and photography flights are usually in support of special operations in preparation for the service of high risk warrants. Crime scene photography is also commonly used for court hearings on major crimes. Transportation flights can include department executives, rescue personnel, election ballots, county employees, evidence, witnesses, prisoners, etc.…”

The Sheriff’s Department has three Airbus AS 332 L1 Super Pumas primarily equipped for search and rescue: “The aircraft is staffed with a five person crew, two pilots and three tactical medics. The pilots are assigned to the Aero Bureau, while the Tactical Medics are assigned to the Emergency Services Detail (ESD), which is part of the Special Enforcement Bureau along with the SWAT team. Each of the Tactical Medics is also a former SWAT team member and their primary duties are support of the SWAT mission. The Super Puma (referred to as Air-5) carries medical equipment for each of the three medics, two patient stations, mountain rescue equipment, ocean/dive rescue equipment, and SWAT equipment for each tactical medic. The amount of equipment carried typically weighs over 1,000 pounds.”

More flexible, the fifteen A-Stars are used for aerial patrol and surveillance and can support any other operation with their FLIR, searchlight, computer mapping, and tactical radios. Deputy Edey: “LAPD and LASD each have their own radio dispatch system for the coordination of responses to law enforcement incidents. The helicopters from both agencies openly communicate on the common Traffic Advisory frequency to facilitate safety and mutual aid responses. For medevac, search and rescue operations, Los Angeles County utilizes a centralized dispatch system which is maintained by the Los Angeles County Fire department. The Sheriff’s Department Air-5 rescue crew monitors the appropriate County Fire radio frequencies for all medical dispatches. There are also computer dispatch terminals at each of the helibases.” Monitoring the same frequency, the county’s firemen can also be dispatched to respond to medical emergencies and fires. With respectively 9,133 and 8,527 fires in 2017 and 2018 devastating 1,381 and 1,894 acres and a many fatalities, California recently paid a heavy toll and the County of LA is directly affected.

The Air Operations unit of the County’s fire department (LACoFD) currently operates eight helicopters, five Bell 412s each fitted with a 360 gallon belly tank and three Sikorsky S-70s with a 1,000 gallon belly tank. All can be used for EMS and SAR with jurisdiction all over the county area. The LACoFD was the first municipal operator to receive Firehawks back in December 2000, two others joining the force in 2005 and 2011. Two new S-70is have been purchased and received in 2017 in response to the devastating fires plaguing the state earlier that same year. They are currently being customized by United Technologies to be be fitted with extended front landing gears, the belly tank, a single-pilot cockpit and EMS equipment.

The choice of a probe-refillable belly tank rather than a suspended “bambi bucket” can be explained by the county’s topography, with steep terrain and many water-filling points that can be completed by mobile water trailers. In addition, the canted design of the Kawak belly tank allows higher airspeed to fly back and forth between water supply and fires, which is a key factor in fire initial attack efficiency. The system has also been selected by the municipal fire department for their four AW139s delivered from 2008 on, call sign Copter 2 to 5. The arrival of the fourth helicopter in 2017 permitted to retire the venerable Bell 412s, while a firth new AW139 purchase was approved by the City Council for delivery in April 2019.

The territory under the responsibility of the LAFD covers the city’s 502.76 square miles and the Air Ops unit missions include EMS and air ambulance, fire suppression, hoist-assisted SAR and high-rise fire response, with a fourteen-fireman team on permanent stand-by alert. Two Bell 206Bs are also on strength for coordination and reconnaissance, all based at Van Nuys airport. For the fire suppression missions, LAFD’s AW139 are fitted with a 450-gallon Simplex 326 GII tank, refillable by a flexible hose. They carry out a yearly average 700 missions totaling about 7,000 flight hours. The first helicopters pressed into service with LAFD’s Air Ops were Bell 47 G3Bs in 1962, two fitted with a 100-gallon tank and a third used for transport and observation.

Altogether, the four units serve the residents of the LA city and county and coordination between them is prime, concludes Edey: “The helicopters from all of the southern California agencies move freely though each other’s jurisdiction. It is very common for the closest helicopter to respond to the pursuit, until relieved by the helicopter with jurisdiction. We frequently monitor each other’s radio frequencies for this purpose.” The main benefit of having helicopters in flight at any given time is to provide maximum availability and fast response.

Gathering the county and city flying responders in a single picture felt like Mission Impossible for French photographer Anthony Pecchi. Already in contact with all agencies in the course of his photo jobs, Anthony is always looking for the special thing and the idea of an emergency services family flight came out of the blue, like a joke in the conversation he was having with his friend at the sheriff’s, Deputy Keith Edey. It seemed inaccessible for Anthony but Keith has developed a good relationship with the other agencies and the idea sounded fun.

On D-day, February 15th 2018, twenty-five highly experienced aircrews gathered in the LAFD briefing room at Van Nuys to coordinate the photo flight. Take-off, transit and shooting, all pilots reacting to the photographer’s various position requirements, like with an orchestra conductor, with the county landscape for background. Add a nice weather, et voilà! Full success for the “little Frenchie in US territory” and the result is clearly up to everybody’s expectations for this premiere over Southern California. A dream came true, mission accomplished!

Acknowledgment: the author and photographer wish to thank Deputy Keith Edey of his more than valuable help and participation in the preparation of this article.